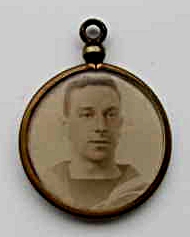 DAVID RICHARDSON was born on 22nd August 1892, the eldest son of John and Matilda Richardson. Both John and his wife were from Barrow Hill having lived near to each other on “the blocks” since childhood.  They married in 1879 and had 3 daughters, Mary, Annie and Lucy, before David and a second son, James, born in 1896.

The family home at the time was a cottage on the top row of the model village at 36, Barrow Hill, built for employees of the Staveley Coal and Iron Company for whom John worked as a bricklayer in a local colliery.

By 1911, 18 year old David was working as a Grocers Assistant and living with his parents, his brother James and sister Annie at Campbell Cottages, a small cluster of cottages by the side of the Campbell Colliery on the outskirts of the village. Shortly afterwards, the family moved again, returning to the “blocks” at 118, Barrow Hill.

David had joined the Royal Naval Volunteer Reserve (RNVR) which was the naval equivalent of the Territorial Army. Men undertook naval training in their spare time and could be recruited from any civil occupation for 3 years volunteer/part-time service. With the outbreak of the First World War in August 1914, these volunteers were called upon and drafted into ships of the fleet.  Five divisions were established in Bristol, London, Tyne, Mersey and Clyde where civilian volunteers trained in old Fleet warships.  The RNVR uniform was distinguished by its wavy gold lace, leading them to be affectionately known as the ‘Wavy Navy’.

David’s enrolment form shows that he served as an Able Seaman with the Bristol Division from 17th January 1916 for the duration of hostilities. He was just over 6ft tall with black hair and blue eyes and his occupation is listed as “shop assistant.” The “ships etc served in” column lists a number of shore establishments where David was based in 1916 and early 1917. These include HMS Victory 1, HMS President 111, HMS Ruthenia and HMS Excellent. His character is assessed as “Very Good” and his ability as “Satisfactory.”

In July 1917, David was serving as an Acting Leading Seaman of the Royal Naval Volunteer Reserve on the S.S. Obuasi, a British Merchant steamer of 4,416grt. built in 1910 and owned by the Elder-Demster Line. Previously the Christopher, the ship had been purchased from the Booth Line in 1914 and renamed. 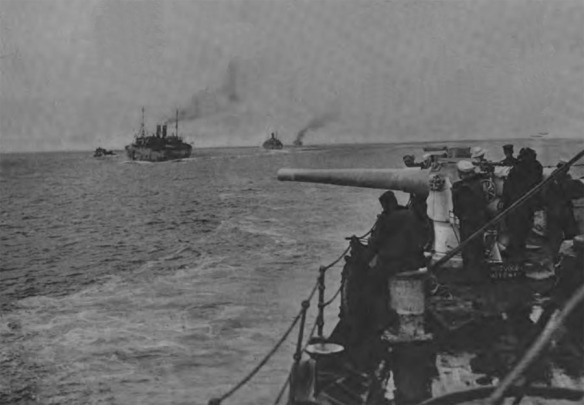 Merchant shipping had long since become a prime target for enemy U-boats in an attempt to cut supply lines and troop transport routes, with the German government announcing the adoption of a policy of unrestricted submarine warfare in January 1917. Regular convoying began in June 1917 whereby a group of ships travelled together with a naval escort as protection from the U-Boats.

David’s younger brother James had been working as a pay clerk in the colliery wages office when he enlisted in the army in December 1915. He was mobilized a year later and served with the Royal Garrison Artillery No 4 Depot where he trained as a gunlayer before being posted to France in early 1917. This must have been a particularly worrying time for their parents, with both sons on active service.

On 8th July 1917, David was one of the two gunners on the SS Obuasi, commanded by Captain Percy Sola. It was carrying general cargo and passengers, en route from Africa to Liverpool along with the SS Ontsha, when it was torpedoed 290 miles from Fastnet, Ireland.

“On the 8th [July 1917], the Obuasi (4,416 tons) was accompanying the Onitsha (3,921 tons) from the west coast of Africa to Liverpool. Both ships had called at Dakar to be fitted with guns, but as there were not enough to go round, a 12-pounder was mounted in the Obuasi,

and the two ships make the homeward voyage in company. At noon the Obuasi was struck by a torpedo, which flooded the stokehold and put the engines out of action. Simultaneously two submarines were sighted, and the master, Mr. Percy Sola, ordered the crew into the boats. He himself, with the two gunners D. Richardson and R. Bradbeer, remained on board, retaining the gig for their own use, and commenced firing at the submarine which was chasing the Onitsha. They fired five shots, and Onitsha got away safely.

Two more torpedoes were then discharged at the Obuasi, the first one passing under her, and the second striking her and causing her to list considerably. The master and gunners then took to the gig, and the submarine came alongside and made them prisoners; it then fired some shots into the Obuasi, which soon afterwards sank. The self-sacrifice of Captain Sola and his gunners was highly and deservedly commended, as by remaining on board and firing their gun they diverted the submarines’ attack upon themselves, and undoubtedly saved their sister ship. The gunners received mention [in dispatches], and the master the D.S.C. [Distinguished Service Cross]. The rest of the crew were picked up the same evening by a destroyer, and landed at Queenstown.”

The USS Cushing received an SOS from SS Ontsha at 12.05hrs, but on proceeding to her assistance found that SS Obuasi had been torpedoed and sunk. Cushing picked up 54 survivors and landed them at Queenstown.

U-Boat 49, commanded by Captain Richard Hartmann, sank 38 allied ships in total, including the Obuasi, but was itself rammed and sunk by British gunfire 2 months later.

Whether David Richardson and Richard Bradbeer sustained injuries during the engagement is not known, but both died three days later, on 11th July 1917, as prisoners of war. Captain Sola survived. The exact nature of the circumstances surrounding Richardson’s death are the subject of further investigation by local researchers. 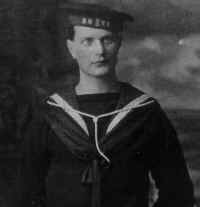 David Richardson was 24 when he died and he is commemorated on the Plymouth Naval Memorial.  His name is also inscribed on the Staveley and Barrow Hill memorials and on his parent’s headstone in Staveley Cemetery. 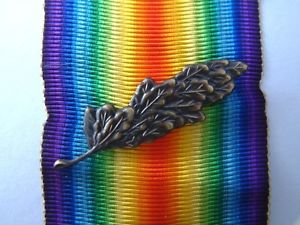 For his bravery, David Richardson was mentioned in despatches for “services in action with enemy submarines” and posthumously awarded the British War Medal with the oak leaf emblem. Captain Sola was made a Companion of the Distinguished Service Order.