Christopher Humphreys and Emma Bell had both been in service in Lincolnshire where they were both originally from. They married in 1880 and their son, George William was born the following year. George was only a toddler when his mother, Emma, died in early 1883 and barely four years old when his father re-married.

19 year old Fanny Bell was from the same part of Lincolnshire as Christopher and it is probable that she was a relative of his first wife. They married in Chesterfield in 1885 and, when Christopher found work as a furnace labourer, they made their home at 5, Canal Row on Hollingwood Common. Their first son, Joseph, was born in 1889 followed by Ernest in 1892, ARTHUR on 15th January 1895 and Henry (known as HARRY) in late 1897.

Before Harry was 6 months old Christopher died in tragic circumstances, leaving his widow, Fanny, to bring up the family alone. With four young sons still at school, times would have been very hard for Fanny in the days before pensions and benefits. She took in a lodger, her brother John Bell, who worked for the Staveley Coal and Iron Company which enabled her to keep the tied cottage. Her step-son, George William, had left home and was working as a railway engine stoker in Wales.

In 1911, all four of Fanny’s sons were, by this time, working at Staveley Works; Joseph was a general labourer at the iron foundry, Ernest and Arthur were Pipe Moulders and 13 year old Harry was a Pipe Dresser. Working for the Staveley Company would have secured their cottage at 5, Canal Row. John Bell was still living with the family and was now working as a farm labourer.

ARTHUR HUMPHREYS was employed as a core maker at the Old Works belonging to the Staveley Company and was an “exceedingly popular lad.”  He enlisted at Nottingham in the Royal Marine Artillery on 26th August 1912, aged 17. Originally listed as Humphrys, the spelling was corrected to Humphreys on his records the following year. Arthur is described as 5’8” tall with a fresh complexion and “greenish eyes.” He had a scar on the right side of his upper lip and a mole over his right collar bone. His religion is given as Church of England and he would likely have attended the Parish Church of St Andrew at Barrow Hill.

Less than a year after his enlistment, Arthur’s mother Fanny also died tragically in 1913, aged 47. His eldest brother, Joseph, took on the tenancy of the family cottage and the brothers made their home base with him on Canal Row.

Arthur became a Gunner 2nd Class in May 1913 and his conduct classification was “First” class. Having completed his training at Portsmouth, he earned the rank of Gunner and embarked on the newly completed battle-cruiser, HMS Queen Mary, on 4th September 1913.

When war broke out, HMS Queen Mary’s first action was as part of the battle-cruiser force under the command of Beatty during the Battle of Heligoland Bight on 28 August 1914. Like most of the modern British battle-cruisers, she never left the North Sea during the war. As part of the 1st Battle-cruiser Squadron, she attempted to intercept a German force that bombarded the North Sea coast of England in December 1914, but was unsuccessful. She was refitting in early 1915 and missed the Battle of Dogger Bank in January, but participated in the largest fleet action of the war, the Battle of Jutland in mid-1916. 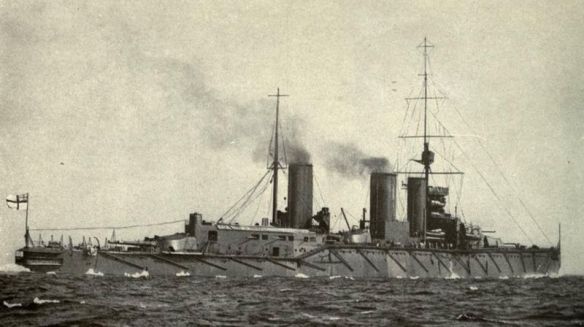 Steaming in advance of Admiral Sir John Jellicoe’s Grand Fleet, Beatty’s battle-cruisers, supported by the battleships of the 5th Battle Squadron, collided with Vice Admiral Franz Hipper’s battle-cruisers in the opening phases of the Battle of Jutland. Engaging at 3:48 PM on May 31, the German fire proved accurate from the outset. At 3:50 PM, Queen Mary opened fire on SMS Seydlitz with its forward turrets. As Beatty closed the range, Queen Mary scored two hits on its opponent and disabled one of Seydlitz’s aft turrets. Around 4:15, HMS Lion came under intense fire from Hipper’s ships. The smoke from this obscured HMS Princess Royal forcing SMS Derfflinger to shift its fire to Queen Mary. As this new enemy engaged, the British ship continued to trade hits with Seydlitz.

At 4:26 PM, a shell from Derfflinger struck Queen Mary detonating one or both of its forward magazines. The resulting explosion broke the battle-cruiser in half near its foremast. A second shell from Derfflinger may have hit further aft. As the after part of the ship began to roll, it was rocked by a large explosion before sinking. Of Queen Mary’s crew, 1,266 were lost while only twenty were rescued. Though Jutland resulted in a strategic victory for the British, it saw two battle-cruisers, HMS Indefatigable and Queen Mary, lost with nearly all hands.

Arthur Humphreys died on the Queen Mary on 31st May 1916 as a direct result of enemy action. His body was not recovered for burial.

The wreck of HMS Queen Mary was discovered in 1991 and rests in pieces, some of which are upside down, on the floor of the North Sea. Queen Mary is designated as a protected place under the Protection of Military Remains Act 1986 as it is the grave of 1,266 officers and men.

Arthur is remembered with honour on the Portsmouth Naval Memorial (Panel 21).

Ernest Humphreys enlisted in the Royal Fusiliers (1471) on 2nd January 1915 and later transferred to the Army Ordnance Corps (038152). He landed in France on 18th November 1915. He was discharged on 8th April 1918 aged 26 years and 2 months. His Silver War Badge notes that he was discharged as a result of wounds received.

HARRY HUMPHREYS lied about his age and enlisted at Staveley in the 22nd (Service) Battalion (Kensington), Royal Fusiliers (City of London Regiment). The battalion came under the command of 99th Brigade in the 33rd Division and the local units were moved in July 1915 to concentrate at Clipstone camp near Mansfield. It was not until August that the Division moved for final training and firing practice at Salisbury Plain.

The battalion was disbanded in France on 26th February 1918 and Harry joined the 26th (Bankers) Battalion in the 124th Brigade/ 41st Division (V Corps, 3rd Army) when they returned to the front on 7th March where they were concentrated near Doullens and Mondicourt.

The sodden mist-shrouded dawn of 24 March, Palm Sunday, prefaced a day of grave political and military crisis as more ground was lost by the British Fifth and Third Armies; the exhausted and disorganised remnants of the former effectively disintegrated as XVIII and III Corps were forced further back. By nightfall the British had lost the line of the Somme (except between the Omignon and the Tortille). In heavy fighting north of the river (and in the face of unceasing pressure by the German Second Army) the right of Third Army repeatedly gave-up ground as it sought vainly to keep contact with Fifth Army’s endless retirements. That evening, after enduring unceasing shelling, Bapaume was evacuated.

During the night elements of the right of Third Army completed a long and confused retirement across the ‘devastated zone’ and occupied a new line but renewed German onslaughts ensured chaotic rearward moves continued throughout the next day, though Royal Flying Corps forays and resourceful rearguard actions by Byng’s cavalry slowed the German advanced guard. By 6pm Byng ordered a further retirement beyond the Ancre to a new front on which to make a stand. Throughout the night of 25 March the greater portions of Third Army attained their designated positions but in the process ‘gaps’ appeared in the defensive lines – the largest of over four miles between V and VI Corps. With Haig increasingly fearful for the safety of Amiens, and uncertain of continued French support, the prospect of continued retreat loomed large.  Source

Harry Humphreys was wounded during the Battle of Bapaume and died on 24th/25th March 1918 aged 20. He is buried in the  Doullens Communal Cemetery Extension No 1  Grave Ref: V.A.90.

Arthur and Harry were both posthumously awarded the 1915 Star, the British War Medal and the Victory Medal. 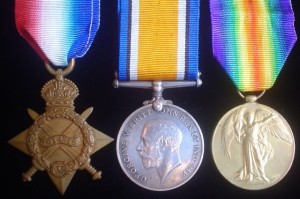