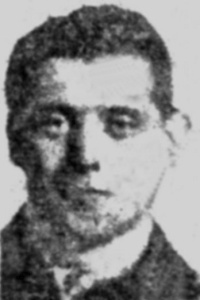 EDGAR BENNETT was born in Brampton, Chesterfield, in 1892, the eldest son of Albert and Martha Bennett.  Whilst he was still a toddler, the family moved to 202, Barrow Hill, a small cottage on East Railway Terrace known locally as the Long Row. Albert had been brought up in Barrow Hill and Edgar had many cousins to play with on the row as well as his younger siblings Louisa (1894), Percy (1896) Charles (1897), Harriet (1899) and Joseph (1900) who had all been born at the house in Barrow Hill.

Edgar’s father was a hewer in one of the many coal mines belonging to the Staveley Coal and Iron Company where Edgar and his brother Percy were employed as pony drivers in 1911; Edgar aged 19 working underground and Percy working on the surface. By this time, his brother Charles was working as a pipe cleaner at the local Ironworks and the family now included Alice (1902), Hannah (1904) and Frank (1910). Sadly, Joseph died in 1913, aged 13.

Immediately prior to the war, Edgar was working at Markham No 1 Colliery. He enlisted at Staveley in January 1915, at the same time as his friend Joseph Walsh and both served as Privates with the 17th Bn., Royal Fusiliers (City of London Regiment). He was allocated the service number E/1638 and they both went to France in November 1915. His brother Percy and Ernest Allen from Barrow Hill also served with the same battalion.

14th November The 2nd Division attacked Munich Trench at 6:20 a.m. by advancing an hour before zero but had many casualties from an inaccurate British barrage. Many troops got lost in the mist and some strayed into Leave Avenue in the 51st Division area, thinking that it was Munich Trench, where they were pinned down. Troops which did reach Munich Trench were severely depleted and confusion reigned when some German troops wanted to surrender and others refused. On the left flank, Lager Alley was crossed unrecognised because of the bombardment and the troops extended the British hold on Serre Trench. Troops withdrew from Munich Trench later in the morning to Wagon Road where they were joined by part of a reserve battalion. On the left flank of the attack, a battalion took over the defensive flank south of the Quadrilateral–Lager Alley, which was linked to the British trench by Cat Street tunnel. Believing that Munich Trench had been captured, two battalions were ordered to attack Frankfort Trench at 2:45 p.m. and were surprised by German machine-gun fire from Munich Trench; the survivors withdrew to Wagon Road.

15 November In II Corps, the 39th Division completed the capture of Schwaben Redoubt, which took until 11:00 p.m. In V Corps the 37th Division relieved the 63rd Division and linked with the 51st Division to the north. Bombing attacks began up Beaucourt Trench towards Munich Trench, which reached the 51st Division around 10:00 a.m. Patrols to Muck and Railway trenches found them empty (except for mud). Companies of the 51st and 2nd divisions attacked at 9:00 a.m. and were caught in their barrage, some troops reaching Frankfort Trench then returning to New Munich Trench. A 2nd Division attack with two battalions of the 37th Division lost direction in the mist and fell back to Wagon Road with many casualties, while a third battalion strengthened the left flank by bombing forward and building a strongpoint in the Quadrilateral, near the top of Redan Ridge, as two tanks in support bogged down early. 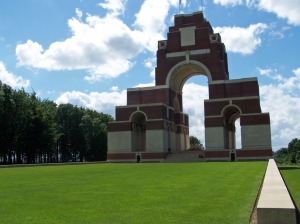 Two of those men were friends Edgar Bennett and Joseph Walsh who were both killed in action at the Battle of the Ancre on the Somme in France on 15th November 1916 and who are both remembered on the Thiepval Memorial. (Pier and Face 8 C 9 A and 16 A).

Mrs and Mrs Bennett heard from a friend of Edgar’s, who was still serving at the front, that “Razzer” Bennett had been killed when he and six others were struck by a shell. “‘Raz’ was hit in the neck with a piece of the shell and he died on the way to the dressing station. The last time I saw him we were going(?) for the fourth lines(?). I passed him and shouted to him to come with me. We got separated a short time afterwards.”

Edgar Bennett was posthumously awarded the 1915 Star and the British War and Victory Medals.