HORACE STANLEY JOHNSON was born in late 1896 and lived in Barrow Hill on the 4th row of block cottages belonging to the Staveley Coal and Iron Company. Horace and his 2 younger brothers, Bernard and Harry, were brought up by their grandparents William and Mary Johnson

Grandfather William hailed from Thoroton in Nottinghamshire where he had worked as a farm labourer before moving his family to Barrow Hill. He was initially employed in a local coal mine, later becoming a labourer at the iron foundry.

At the age of 14, Horace was also working as a labourer at the iron foundry before moving to work at Markham (No 2) Colliery. He was a member of the Home Guards.

Horace enlisted at Chesterfield on 5th June 1915 when he was 18 years and 7 months old. He was 5’8” tall and weighed 124lbs. He was posted to the newly-formed 17th (Service) Bn., (Welbeck Rangers), Sherwood Foresters (Notts and Derbys Regiment) which moved to Aldershot in October 1915 and came under orders of 117th Brigade in 39th Division. The Battalion moved to Witley in November 1915 and on 23rd December 1915, Horace was appointed Lance Corporal.

The Battalion embarked to join the British Expeditionary Force and Horace arrived in France on the 6th March 1916 where they concentrated near Blaringhem to train and gain experience in trench warfare.  On the 23rd of that month, his rank reverted to Private.

Having been at the front for only a few weeks, Horace was shipped back to England on 28th May 1916 suffering from Otitis Media, an acute suppuration of the middle ear. The local newspaper reported that he had actually been “invalided home suffering from shell shock.” Horace remained in hospital in England until the 26th July 1916 when, after a very short period of convalescence, he once again embarked for France on 4th August 1916.

A stretcher bearer party of the Nottinghamshire and Derbyshire Regiment stands on a road in Fonquevillers in March 1917. All are wearing their steel helmets and carry their box respirators around their necks. They are holding an empty stretcher, ready to collect casualties as necessary.

During August 1916 the Division moved towards the Somme region and for most of the Battle of the Somme the 117th Brigade of the 39th Division were serving in front line trenches around Hamel, both north and south of the River Ancre. The Division were instructed to renew the attacks around a spur at the south of Beaumont-Hamel, which had been suspended since the 1st July. This attempt however, like those earlier in the summer, were to prove very costly and relatively ineffective. The 17th Sherwoods took part in the Ancre Operation on the 3rd September, which involved an attack on the German trenches opposite Hamel in which they suffered over 450 casualties. They were later part of the final attack on St Pierre Divion and the push to take the Hansa Line on the 13th November.

According to a newspaper report, Horace was wounded in the hand during this time. 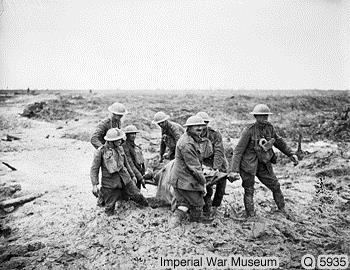 There was little more significant activity on the Salient until 1917, when in the Third Battle of Ypres an offensive was mounted by Commonwealth forces to divert German attention from a weakened French front further south. The initial attempt in June to dislodge the Germans from the Messines Ridge was a complete success, but the main assault north-eastward, which began at the end of July, quickly became a dogged struggle against determined opposition and the rapidly deteriorating weather.

The whole Ypres Salient was crowded with troops filing forward into their assembly positions. The ground was a wilderness of shell-holes, and intermittent rain during the previous days had begun to soak the soil.

The opening battle of ‘Third Ypres’ (also known as Passchendaele) was preceded by weeks of tremendous and barely concealed preparations. The artillery bombardment, of unprecedented scale, culminated in a stunning crescendo at the moment of assault, 3.50am, 31 July. In mist and semi-darkness, British infantry advanced behind a precise and deafening ‘creeping barrage’, across a battlefield dramatically illuminated by bursting shells and flares.

Widespread early progress was made across the shattered German outpost lines. Notably, in the north, XIV Corps got across the Pilckem Ridge and, in the centre, XVIII and XIX Corps troops rapidly closed on the Steenbeek; by 8am St Julien was occupied by the 39th Division. In the early afternoon, after the onset of persistent drizzle, the advanced troops at the centre of the attack met increased German resistance and progress halted. In increasingly heavy rain determined German counter-attacks forced a British withdrawal; but these counter-thrusts were held and the line of advance consolidated.

Despite being ordered that evening to continue the attack, the relentlessly wet conditions brought Gough’s first assault to an end.

“We worked together as stretcher bearers and went into action on July 31st. We had nearly got to our destination when I jumped into a shell hole and Horace jumped into the next one to bind his man up. When I got out, to see if he was ready to carry them away, he lay stretched out by the side of his wounded man. He was dead, and I can tell you it was a great blow to me. I have lost my best friend, and I can safely say he was liked by everyone in the Company. He was such a good worker. “

Horace Johnson is remembered on the Ypres (Menin Gate) Memorial, Panel 39 and 41. The memorial site was chosen because of the hundreds of thousands of men who passed through it on their way to the battlefields and commemorates those casualties who died on the Salient.

Horace was posthumously awarded the British War Medal and the Victory Medal.

When his possessions were returned to his Grandmother, Mary, his watch was missing and she was awarded 25 Francs in compensation for its loss.