Lewis Hall and Sarah Richardson were both born in Barrow Hill in the “Blocks” cottages, built for employees of the Staveley Coal and Iron Company.  Being of a similar age, and living just one row apart, they would have known each other from childhood.

Lewis was working as a railway engine fireman and Sarah was a dressmaker when they married at Staveley in 1891. The couple made their home with Sarah’s widowed mother, Elizabeth at 120, Barrow Hill, on the row adjacent to Devonshire Terrace, where Sarah had grown up. Their first child, THOMAS HENRY HALL, was born a year later, in 1892, and his sister, Sarah Elizabeth in 1897. 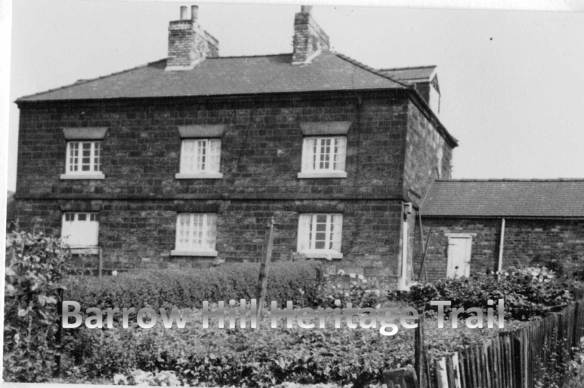 In 1901, Lewis was working as a hewer in the coal-mines and is also listed as an Assurance agent and a local preacher. The children grew up in the village surrounded by many aunts, uncles and cousins and it is likely that the family attended the nearby Zion Primitive Methodist Chapel on what is now Campbell Drive. Thomas was then aged 8 and would have been attending the Staveley Works Schools on the brow of the hill.

In 1911, 19 year old Thomas was employed as a colliery screen labourer, working above ground at a local pit, whilst his father, Lewis, was still working as a hewer.

Thomas’s grandmother, Elizabeth, died in April 1913 aged 80 and more tragedy followed with the death of his mother, Sarah, on 8th February 1914 and his sister, Sarah, on 28th November 1914 in a house-fire. When probate was granted, Sarah had left effects valued at £185 to her husband, Lewis, who was described as a General Dealer.

Thousands of Staveley colliers were called to battle. Along with many other comrades from the North Nottinghamshire coalfield and the industrial towns of Derbyshire, Thomas joined the 16th (Service) Battalion of the Sherwood Foresters (Chatsworth Rifles) as a volunteer. The regiment had been raised at Derby on the 16th of April 1915, by the Duke of Devonshire and the Derbyshire Territorial Force Association.

One of Thomas’s cousins, David Richardson, had joined the Royal Naval Volunteer Reserve (RNVR) and was called upon to serve with the fleet when war was declared in August 1914[i].

After his other recent losses, it must have been an extremely anxious time for Lewis when Thomas enlisted at Chesterfield on 31st May 1915. His records show that, at the age of 23, Thomas was almost 5’10” tall and weighed 132lbs. He was given the service number 26788 and was initially posted to Buxton, moving to Redmires, near Sheffield on 9th June 1915, then to Hursley on 2nd September to join 117th Brigade, 39th Division. At the end of September 1915, he moved again to Aldershot and then to Witley Camp, in Surrey, on 8th November for final training where he remained until he was posted overseas.

Thomas embarked at Southampton with his battalion on 6th March 1916, landing at Le Havre, and concentrating near Blaringhem. During the following months, the Division began to train and gain experience in trench warfare.

It was during this time in the trenches that Thomas was wounded on 5th June 1916. He was treated in the field but died of his wounds the following day, aged 24, the 25th casualty of the regiment in France.

Thomas Henry Hall is buried in plot V. D. 92 in the Bethune Town  Cemetery. For much of the War, Bethune was comparatively free from bombardment and remained an important railway and hospital centre, as well as a corps and divisional headquarters. The 33rd Casualty Clearing Station was in the town until December 1917.

Thomas is also remembered, along with his mother and sister, on the headstone of his grandparents’ grave in Staveley cemetery.

[i] Thomas’s cousin David Richardson was killed in action in 1917. He was mentioned in despatches and is also remembered on the Barrow Hill Memorial plaque and the Staveley Parish Memorial