Doncaster born railway worker, George Henry Walker, married Ellen Eliza Lindley in 1876. The couple lodged at Paradise Row, near the railway depot at Barrow Hill, with Ellen’s mother Harriet who was housekeeper to plate-layer George Hadfield.  31 year old George was an engine driver and he and his 24 year old wife had two young children, Ernest Lindley and baby John Willie.

By 1891, the couple were living in one of the cottages which had been newly built for employees of the Midland Railway at 3, Allport Terrace.  Ellen’s mother was living with the young family which now included 7 year old Albert Edward and 5 year old Charles Bernard.  Three more children had not survived. Just one year later, in 1892, Ellen died; possibly in childbirth with WILFRED who grew up motherless.

Whilst Wilfred was young, and later when all of the boys were working, George employed a housekeeper to look after his family whilst he went out to work. By 1901, the four older boys were also employed; 23 year old Ernest as a railway engine stoker, 20 year old John Willie as a railway engine cleaner, 17 year old Albert Edward as a labourer at the local foundry and Charles Bernard as a railway engine fitter. 9 year old Wilfred was still at the village school just a hundred yards away from Allport Terrace and was looked after by local girl Harriet Knowles.

Charles had married Agnes Bell in 1910 and moved to Gainsborough where he was employed as an engineer’s fitter whilst Albert had moved to Conisborough to work as a motor waggon driver. Railway engine stoker Ernest was lodging next door at 5, Allport Terrace, with the Suires family.

Still at home in 1911 were 61 year old George, 30 year old unmarried  John Willie who was now a railway engine stoker and 19 year old  Wilfred who had followed his father and brothers and was working as a railway engine cleaner. Beatrice Davis from Mastin Moor kept house for the family.

Wilfred enjoyed football and played for the Staveley Parish Church Football Club. When war was declared, in August 1914, he was working as a fireman at the Great Central Railway Loco Dept at Staveley.

Wilfred enlisted with the 9th (Service) Battalion, The King’s Royal Rifle Corps, in August 1914 at Staveley. The Battalion was raised at Winchester on 21st of August 1914 as part of Kitchener’s First New Army and joined 42nd Brigade, 14th (Light) Division. They trained at Aldershot, moving to Petworth in November and returning to Aldershot in March 1915. Initially without equipment or arms of any kind, the recruits were judged to be ready by May 1915, although its move to the fighting front was delayed by lack of rifle and artillery ammunition. They proceeded to France, and Wilfred landed at Boulogne on the 19th of May 1915.

The Battalion had been in reserve, near Ypres, when, at 7pm on 19th July 1915, a large mine was exploded by 175th Tunnelling Company RE, under a German trench position. The spoil from the detonation threw up a lip 15 feet high, around a crater 20 feet deep and 120 feet wide. After the firing, it was immediately occupied by two Companies of the 4th Middlesex (8th Brigade, 3rd Division). British artillery quelled all signs of German attempts to recover the crater. 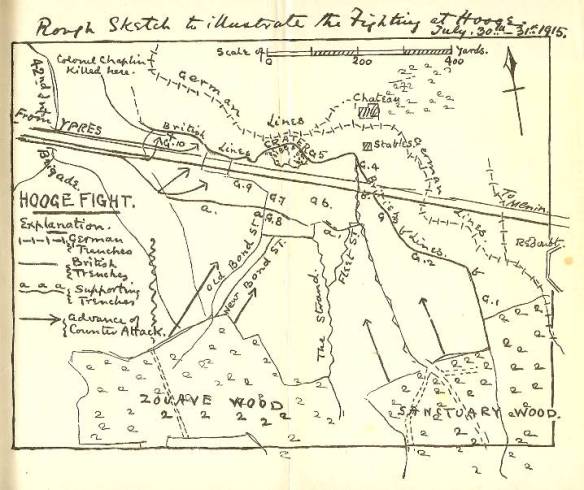 German retaliation came on 30th July 1915. The Hooge sector was being held by 41st Brigade of 14th Division, which had taken over the area only a week before. The 8th Rifle Brigade held the near crater lip, with the 7th KRRC on their right, across the road. These battalions had relieved the others of the Brigade during the night.

At 3.15am, with dramatic suddenness, the ruins of the Stables were blown up, and jets of flame shot across from the German trenches. This was the first time in warfare that liquid fire flamethrowers had been used by the Germans against the British. Immediately a deluge of fire of all kinds fell on the Brigade, and on all support positions back to Zouave Wood and Sanctuary Wood. The ramparts of Ypres and the exits from the town were also shelled. The Germans achieved complete surprise, but although the British front lines were evacuated, they did not follow beyond them. There was intensive hand to hand fighting in some trenches; eventually virtually all of the positions held by the Brigade were lost. The 42nd Brigade on the left was not attacked, and the left Battalion of the 46th Division on the right held on. Division rushed up reinforcements, and a new line along the edge of the woods was formed. At 11.30am, orders were issued for a counterattack by the 41st and 42nd Brigades. A feeble 45 minute bombardment preceded this.

A covering artillery barrage lifted at 2.45pm and the attack was launched, preceded by the bombers and “D” Company in two lines cleared our front line and rushed the 200 yards to the enemy trenches which they carried at the bayonet point. The trench G-10 was taken but a lively bombing encounter took place and considerable losses from rifle and machine gun fire occurred. Three platoons of “C” Company were almost wiped out when charging in the direction of Old Bond Street in order to cover the exposed flanks of the two leading companies. (Taken from ‘Celen Et Audax.’ a record of the 9th K.R.R.C. 1914/1918 by the battalion Intelligence Officer.)

Wilfred Walker was initially posted as “missing.” Another Staveley soldier, Rifleman W. Morton, who went into the engagement with Wilfred informed the family that he saw Wilfred “knocked over.” 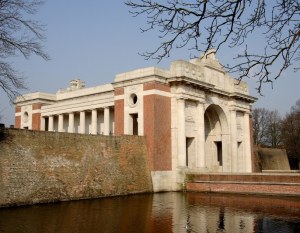 With no known grave, Wilfred is commemorated on the Menin Gate Memorial the site of which was chosen because of the hundreds of thousands of men who passed through it on their way to the battlefields. It is one of four memorials to the missing in Belgian Flanders which cover the area known as the Ypres Salient. 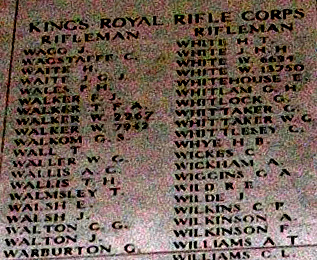 Wilfred Walker was posthumously awarded the 1915 Star, the British War Medal and the Victory Medal.

The Derbyshire Times noted that “an interesting thing associated with the family is that another of Mr Walker’s sons returned from Spitsbergen to enlist. He has joined the Royal Engineers and is at present near Aldershot. He was engaged in colliery work before returning home.”